EPGSL is still driving toward opening up the 2020 Revised Season as soon as possible.  As most of you know, the State of Illinois entered into Phase 3 of their recovery on May 29, 2020.  Phase 3 allows for youth sports teams to begin practicing, but unfortunately still does not allow for games.  We will try and begin practices in the week of June 1, 2020 according to the precautions we have put together in the link below.  Before any practices, games, etc., every coach, player, volunteer, umpire, etc. will fill out the waiver below.

Our hope is that Illinois gets to Phase 4 by June 15 and that hosting games will be included in Phase 4.  However, we obviously do not know that for sure.  Please see precautions and waiver listed below.

CLICK HERE to see our official Little League boundaries and policy about girls who do not live or go to school in those boundaries.

Should you have a product or service needed provided by one of our sponsors please consider patronizing them. We couldn't have a league without them.

We have listened to your suggestions and EPGSL will now be taking payments electronically through PayPal or a credit card.  You will enter registration normally at the link below and follow through all the steps.  Once you get to the bottom it will give you the chance to pay electronically.  If you have multiple kids, you will pay for each kid individually and the system will prorate the cost for each kid eventually getting you to the total cost for that many players.  You do not have to have a PayPal account to pay electronically.  You will be able to add a credit card number on a secure site and give your payment that way. 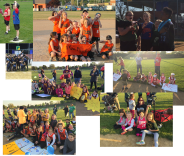 Action shots, selfies, fans, team pics, etc.!  We want your photos.  Please share your EPGSL photos with us so that we can share them with others.  Send us your photos at fanphotos@epgirlssoftball.com

What An All Star Season!

All Stars have come to a close, but not before a tremendous amount of success.  Every one of our girls fought hard to show the City, the Suburbs, the State and even the Midwest what EPGSL softball is all about.

The most success came from our 10U Green and our 16U teams.  The 10U Green team lost their first game in the state tournament to River Forest putting them in "losers bracket".  They had to fight back with seven, yes seven straight wins including beating the River Forest team twice by slaughter in the Championship games winning the Little League 8-10 year old Illinois State Championship.

Our 16U team, which was actually a mix of 14U and 16U players finished pool play at State in 2nd place and forced a rematch of the only loss they had in the tourney for the State Championship game.  The girls put their loss the day before behind them and took charge, beating a very tough Tri-County team to win the Little League Senior Illinois State Championship.  As State Champions, they went on to represent Illinois in the Little League Central Regionals in Byron Center, MI.  Going 3-2 in the regionals, EPGSL was eventually eliminated from the tourney by the team from Iowa, finishing in 3rd place overall for the Central Region.  The only two teams EPGSL lost to were the teams that finished #1 and #2 in the region.  The champion of that tournament, the home team from Byron, MI, is currently 3-0 in pool play of the Little League Senior World Series in Delaware.

The 8U Green team won the EPGSL tournament and finished 2nd in Homewood with a strong showing in the Orland tournament as well.

The 10U Black team, The Killer B's, did not let being considered a B-team phase them as they had strong showings in each of their tournaments including a Championship in the Niles All Star Tourney.  This is the first championship for an EPGSL B-team.

Our 8U Black and 12U teams gave it their all, but did not end up with any tournament championships.  The girls all locked in some great all star experience which is sure to help them out in the future.

CONGRATS TO ALL OUR ALL STARS!

The next EPGSL General Board Meeting will be held on March 5, 2020 at the Evergreen Park Community Center (97th and Homan).  Meeting will begin at 7:30 pm.

Sign up for EPGSL TextAlerts: So easy, a Caveman could do it

Our website is the primary way the board communicates with parents and coaches. We also HIGHLY encourage everyone to sign up for text alerts (see below).

Text Alerts are immediately posted on the website's main page, and are the fastest way the board communicates league information to parents, players and coaches. That includes when games are canceled.

Stay in the loop with instant text alerts (tweets) from the EPGSL ... just text the words 'follow epgsl' to the number 40404.  Our tweets will be delivered to your cell phone when we send them. All you need is a cell phone.

Where to Find Us